Results of Meeting on 30th January re Budget proposals

The summary report of the site visit is posted on the information page.
Posted by Cromwell Bottom Wildlife Group at 15:20:00 1 comment:

I do hope I'm wrong here but I have been watching the KF on the Elland side of Crowther Bridge by the Fishermans car park for a couple of weeks, only today I watched it dive into the reed area where the steps go down and the tin hut is, but it didn't come out, now I might have missed it if it came out sideways quick but I waited for half an hour and even went down the steps to look for it but couldn't see it, if anybody finds it put a note on the blog please. Yours gwh
Posted by gwh at 12:46:00 4 comments:

Thanks to everyone for coming last night on a damp and miserable evening ,thanks to Bob Wilkinson updating us on whats happening with north loop and access for surveying the site he will be supplying the lock and keys for us. We now have a treasurer in Niall Roach who has graciously accepted the role , Hugh gave us a talk on how to conduct a survey and what to look for.

The next meeting will be on Tuesday the 21st of February venue to be announced at a later date.
yours GWH
Posted by gwh at 19:45:00 No comments:

Calderdale have published their draft budget which include severe proposed reductions in the Countryside Service.

The following location has all the proposals and a feedback form which can be downloaded;
http://www.calderdale.gov.uk/council/consultations/council-budget/communities-budget-proposals.pdf

The Countryside Service proposals are shown on the last 3 pages of "Communities Directorate Detailed Growth and Savings Proposals" and although it doesn't say much it does show a headcount reduction of 6 and a budget cut of £160K in 2013-14. This is bound to have a major impact on the services we see from the Countryside Service and I personally intend to provide feedback to the Calderdale Cabinet. If you wish to do likewise then feel free, as the more voices raised expressing concern the better.

Many thanks to everyone who came on Saturday for the first volunteer day as Bruce has already said the weather gods were smiling on us and we cleared quite a large area of trees and scrub .
The feeling was to have the second Saturday in the month as a regular work day , for those who couldn't make it or would like to come along to the next one on Saturday the 11th of Febuary you will be very welcome, the plan is to plant some trees in the tag loop and various areas around the site. yours GWH

More images have been uploaded from Mike Henshaw on the Birdlife at Cromwell Bottom page.

Venue Change to the January meeting

Hi everyone the meeting on the 24th of January has been changed to the Mulberry Suite , Bob Wilkinson who is heading the recapping of North Loop is going to update us , and then we will have our meeting directly after, meeting to start at 7pm , Hugh will also be running through how to conduct a survey and access to north lop issues which will take approx 45mins . For those of you who don't know where the mulberry suite is , if you turn left on to Church Lane and then immediately left on to Parsonage Lane you will see the school gates in front of you go straight forward and park in the school car park the Mulberry Suite is under the the new set of flats directly in front of you .ALL WELCOME
yours GWH Map Link
Posted by gwh at 15:49:00 No comments:

Firstly thanks to everyone who attended today , the day started with SUNSHINE (at last), an aerial display from a sparrowhawk and ended with a kingfisher and we had some dam good info and advice in between .
To Chris and Nigel (RSPB) many thanks for your time and attention , and we look forward to seeing your report and of course your welcome to come back at any time. yours GWH      Photo Link
Posted by gwh at 22:15:00 4 comments:

Birds at the new Feeder Site

The new feeder area is up and running thanks to Allan's work on this , a few of the birds seen so far are
GSW / Nuthatch / all the tits / Bullfinch / and Redpoll today , looking forward to seeing this area progress yours GWH
Posted by gwh at 13:23:00 1 comment:

As some of you know the North Loop area of Cromwell Bottom is to be recapped , the work was to go ahead in 2012 however due to contract issues this will not now happen until 2013 , the known newt colony that is now there will have to be moved and a new pond will be made away from the recapping area .
This gives us an opportunity to do a study / survey of that area which has been closed to us for 10 or so years , the details have to be sorted out with Huge /Bob / Robin etc, but limited access will be given to a selected few, from the Groups involved . Anyone wishing to do a survey could they get in touch with me and when things are sorted i will relay the details to you .
yours GWH
Posted by gwh at 12:58:00 No comments:

A beautiful sunny day at Cromwell Bottom, my first birding trip of the year and also my Birthday!

On the car park feeders were 3 great tits & 2 blue tits. 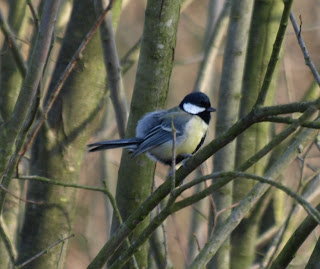 I walked over the bridge, the river was up to nearly 2 metres and was gushing powerfully over the weir, not surpising after the weather we've had lately!

I walked over the yellow brick road route again hoping to pick up another bird of prey as on my last visit but no such luck. As I reached the top and rejoined the path down towards spider bridge I noticed some goldfinch feeding in the mud, I counted 8 in total but im sure there were more as they kept flying in and out. Another small brown bird joined them, I would say smaller and fatter than the goldfinch, brown streaked back with pale underparts streaked with black, it also had a distinct white wing bar. My thoughts after it flew off were juvenile dunnock, but on looking up on my return it could have potentially been a lesser redpoll, I really can't be sure as my photos didnt focus (how annoying!).

As I reached the bottom of the path I noticed some new feeders off to the left of the bridge, here were 8 great tits, 3 blue tits and a robin. The area was also underwater so whoever is filling the feeders up well done to you!!

Carried on into the main part of the reserves, another 2 robins, blackbird & wren (heard). 2 cormorants on the water ski lake with the usual numerous Black Headed & Herring gulls. This one seemed to be a very short trip, I think I spent too long watching the goldies! Headed back via the same route, Cormorant flew over on the way back. 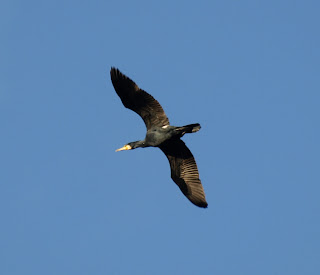 Water levels starting to pick up on the lakes now which is good news, if only I could get around to see the far end of the main lake where there is open water (paths were under a good amount of water and I didnt fancy trying!). Hopefully we can clear some of the reeds in 2012...