Six of us attacked the balsam this morning - me being the novice, tutored by Shelagh, John, Bruce, Allan and Graham.
If you've never tried it come and have a go next time. It's a cross between weeding and a combat sport! You don't actually bash it, just pull it out by its rather feeble roots. There is loads and loads of it and it needs pulling up before it flowers to keep it at bay. We had already devastated quite a large area by 12noon when I had to leave, but the others continued longer. I hope there are some photos of the felled stalks as it's very satisfying to see the fruits of your labours.
Lessons learned: 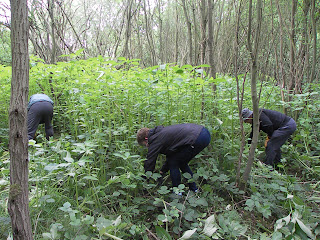 Here's to next time!

Thanks for the brilliant report Margaret. It is hot work but hopefully will be worth it. I only took one, not very flattering picture and then got stuck in.

100 kids would be great - they are closer to the base than us adults.
It was worth it Bruce - I noticed considerably less in that area compared to last year. Fingers crossed - hardly any next year.
Hope you had a good few on Weds for part 2.
I was photographing Swallowtails that day in Norfolk, not quite as Back aching!