This was about 3/4 of the way along the hedge beside the River Calder at Cromwell Bottom, today. Each fruit has been affected along this shoot.
I did a search for "Gall on Blackthorn" and Wikipedia informed me that it's Taphrina pruni. It's sometimes known as Pocket Gall, as the empty, flattened, elongated fruit is pocket-like.(See white object at the bottom of the shoot.)
The same fungi infects other Prunus species, and a similar one infects Alder. 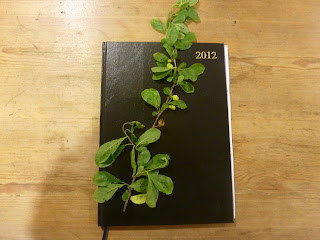 I was looking for Dodder, a parisitic plant, which has just been reported by Portia Fincham, who found the Yellow Birdsnest at Todmorden. It was 6 years ago, she admits, and it was on this hedge near the furthest kissing-gate into Tag Loop. (Nearest the railway.) She did note it in July, so it was unlikely to be visible today, and it wasn't.
Posted by Steve Blacksmith at 22:26:00 1 comments

GT Spotted Woodpecker in wood near reserve. Blue tit feeding young in nest box on reserve. Goosanders on river. All taken a few days ago 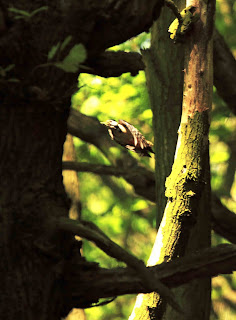 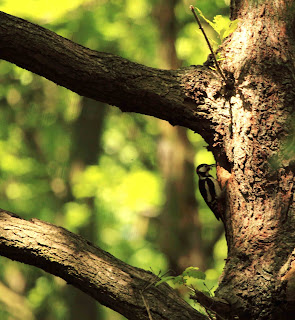 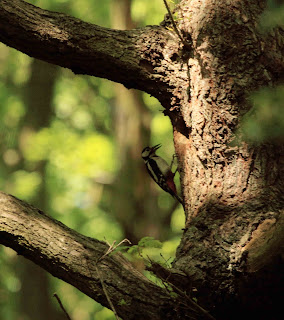 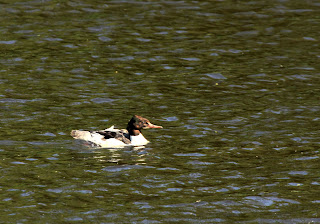 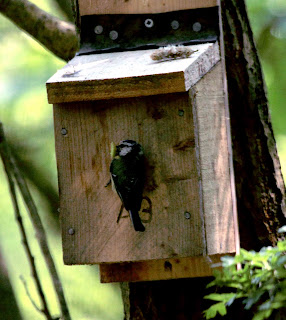 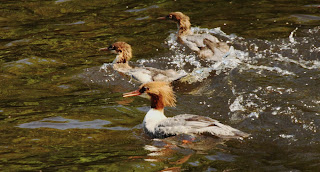 Hi Everyone just to remind you all the next working party is on the 16th June NOT the 9th  . Also the next meeting is on the 19th( ON SITE AT CROMWELL BOTTOM 7-7.30 pm) come and join in and see what we are trying to achieve or just have a stroll in good company and if it rains we will go to the pub,   and the day after on the 20th is the summer solstice walk at 7pm  again a great evening in good company . yours Graham
Posted by gwh at 13:56:00 2 comments 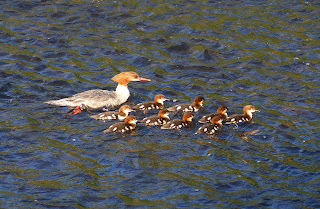 Late post for 28/05/2012 found this brood of 9 on it's first outing on the river also Common Sandpiper still around.and nice to see 4 Linnets
Posted by Mike Henshaw at 10:08:00 0 comments

answered my own question as i had my first large red on tag loop this morning yours gwh
Posted by gwh at 19:17:00 1 comments

Not seen any this year at all, if anyone has any sightings could you post on here or let me know please. yours GWH
Posted by gwh at 22:33:00 0 comments 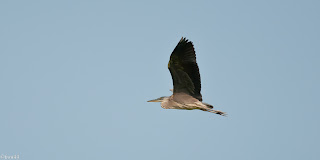 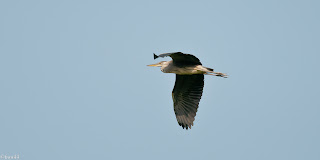 Couple of shots of the Grey Heron this teatime
Posted by Dave Franz at 20:13:00 2 comments

One biodiversity issue which has become ..... [More information]
Posted by Cromwell Bottom Wildlife Group at 15:13:00 0 comments

Just a quick thank you to everyone who came to the meeting last night, to the new ones there I hope we weren't too boring. The next meeting is a bit different its  A SITE MEETING where we will have a walk round and identify what requires doing and where we can improve things so come along and make your feelings for the reserve known this will be on the TUESDAY 19th JUNE at 7pm IN THE FISHERMAN'S CAR PARK . Link to meetings.
Posted by gwh at 11:38:00 0 comments

Single bird this morning on the river along with a Kingfisher,great job on Sat by the feeding station for the stone for Colin. 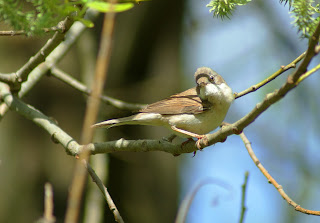 Photo of Whitethroat by the river then along came the rain.
Posted by Mike Henshaw at 14:46:00 3 comments


I notice on the Calderdale bird blog there have been comments made about tree planting up Blackshaw Head and its possible effect on moorland birds. If there isn't input from birders, we may get trees in innapropiate areas.

Mark Turner Mark.Turner@pennineprospects.co.uk
9 May (6 days ago)
to Mark

One this afternoon on the reserve scrub by the weir , singing its head off couldnt get a pic of though it was right inside the dense stuff.  yours gwh
Posted by gwh at 17:15:00 1 comments

Just a reminder to anyone coming to the meeting this Wednesday  use the
BOTTOM ENTRANCE to the Fire Station nearest the traffic lights
PLEASE THIS IS VERY IMPORTANT.
yours Graham
Posted by gwh at 15:46:00 0 comments

Just a quick thank you to everyone that helped with the preparation of the 2 areas  for the memorial stone and a seat, it was quite heavy going at times but we got there. Thank you,  yours Gwh
Posted by gwh at 17:17:00 1 comments

Report on May 12th meeting at CB 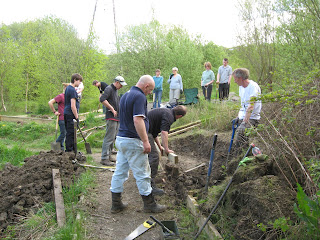 Snail found on the reserve 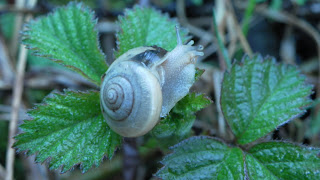 This is a snail found on the reserve a couple of weeks ago.
I think its one of the heath snails Helicella italia any other ideas?
Posted by Cromwell Bottom Wildlife Group at 14:42:00 1 comments

For those that missed it, here is the Twite article that appeared on Countryfile.


If you have any records or sightings of newt anywhere in Calderdale then please contact:

This Saturday 12th of May on the Reserve

Just a reminder that we are meeting in the main car park at 9:00 to 9:30
Lots to do and talk about. We hope to welcome some new faces as well!
The weather looks promising too. Should be an enjoyable day. 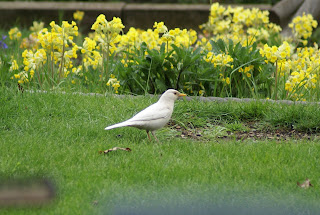 A lovely warm day today, felt like a spring day again (at last!). I set off from the fishermans car park where there was nothing on the feeders. As I entered the reserve I could hear plenty of Jays squabling, I decided to have a look what was going on, I noted at least 4 Jays and a carrion crow nearby, I think they were upset by its presence and were making a real racket!

I reached the feeding station which again was noticably quiet with just 1 blue & 1 great tit.

As I crossed the river I saw a bird move alongside the river, a lovely female blackcap which disappeared as soon as I turned the camera on! Just a few yards away I could clearly hear a whitethroat calling and was rewarded with a very obliging bird, I even managed a few good pictures! After taking these I was fortunate enough to see another just a few yards away but didnt manage any pictures of this one. 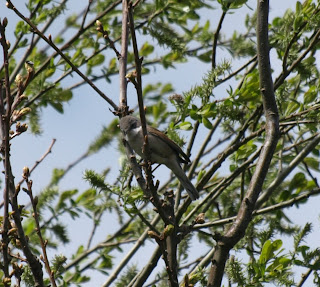 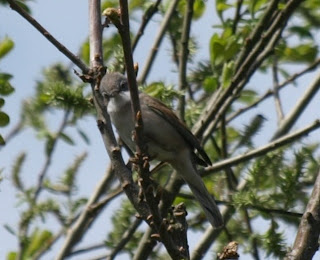 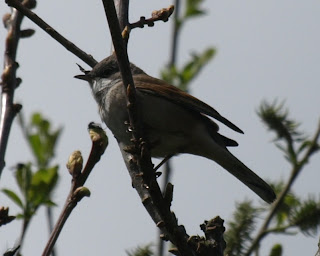 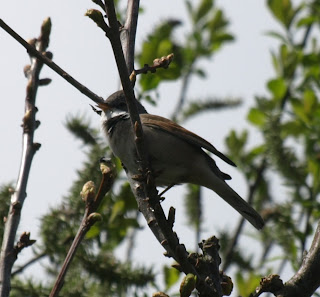 I walked further along the river and managed to locate the female goosander with 4 gorgeous chicks. 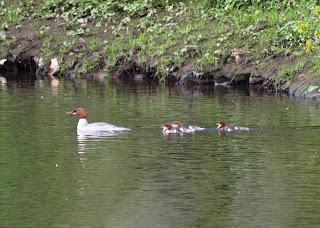 I checked over the reed bed and was surrounded by a wall of sound. Reed warbler, Sedge Warbler, Reed bunting and chiffchaff were all going for it trying to outsing each other, a wonderful sound! Couple of mallard now on the reed bed pool & coot.

Taking the route between the 2 large pools I heard plenty of wrens adding to the birdsong and arriving at the other side saw numerous swifts flying over the ski lake. There was a grey heron on the other side of the ski lake with potentially 2 young but could only make out grey blobs next to the new white ramp, I really cant be sure though.
On my way back towards the bridge over the river I heard 2 willow warbler singing and also saw a song thrush mimicking the beginning of a sedge warbler call! Also saw this peacock butterfly sunbathing on the path! 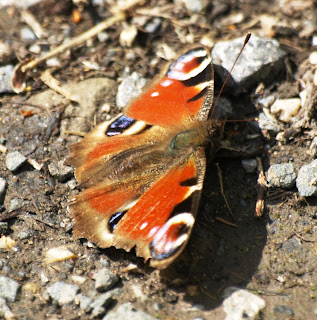 Arriving back at the feeding station things had picked up with 3 bullfinch (2 female + 1 male) and a chaffinch... and a cyclist. Still numerous dogs off leads around the reserve.

As I headed off over the yellow brick road I heard the Jays squabbling again as I headed back to work after a lovely lunchtime at Cromwell Bottom. 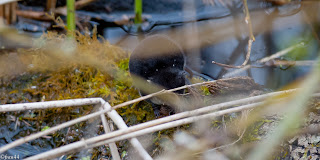 This was at Cromwell Bottom today is it a Water Shrew
Posted by Dave Franz at 22:19:00 2 comments

Sunday on the Reserve 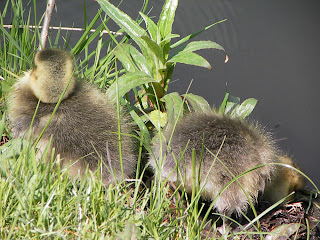 We had a short walk around the reserve and had:
Lots of Willow Warblers
Chiffchaffs
Black Caps
Garden Warblers
Whitethroat next to river
Reed Bunting near Cromwell Lock
Goosander
Canada with 2 chicks
And a short burst from a Reed Warbler
near Cromwell lock
only a hand full of swallows
+ the usual resident birds.
Posted by Bruce at 09:49:00 1 comments 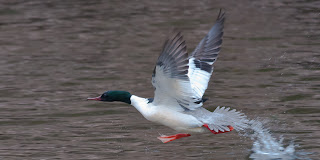 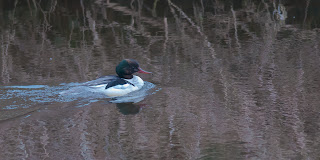 Two male Goosander and a female with three chicks on the river today
Posted by Dave Franz at 17:56:00 1 comments 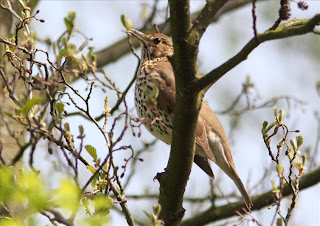 Singing in the sunshine yesterday on the reserve by the Calder!
Link to it singing!
Posted by streetburner at 16:57:00 0 comments

A single bird was around the reserve this morning at 0915 and then flew offNW>
Posted by Mike Henshaw at 12:00:00 1 comments

There is new information relating to the next meeting at King Cross on the 16th of May on the Members Page
Posted by Cromwell Bottom Wildlife Group at 15:08:00 0 comments