A brief respite in the weather had me heading for Tag Loop to film Ringlet Butterflies. Difficult as they don't stay still for long, but success in the end. Plenty of Meadow Browns, Small Skippers, Small Heaths and 5 Spot Burnetts kicking about.
Also managed to film my next target species, Large Red Damselfly by the ponds just before the rain stopped play. Banded Demoiselles and Blue-tailed Damsels around, plus a Hawker species that frustratingly refused to land.
Plenty of songbirds singing throughout the reserve. Not sure how the weather has affected their breeding successes but I guess many will have failed and re-laid to compensate for their losses. Wonder if we'll be seeing lots of late fledglings this year as a result??? 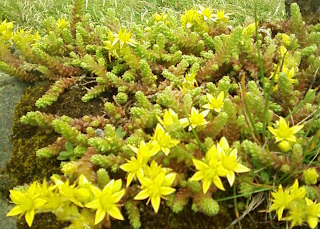 Lots of Common Spotted Orchids in flower and just outside the reserve, some Biting Stonecrop is flowering on a roadside wall. The picture was taken on my mobile.
Posted by TheBaldIbis at 21:35:00